6 May 2011
By Andrew Thomson, THE WARRNAMBOOL STANDARD 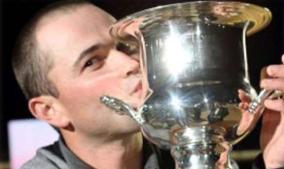 Owner Nathan Rooney with the Cup

There has probably never been a more deserving greyhound win the $45,000 Norlane Hotel Warrnambool Cup (450m) then Arsonist, which torched her rivals last night.

The fawn bitch ignited on box rise to blaze to the lead in the cup and when there was a little bit of interference on the first corner she set up a winning break.

Arsonist has now had 10 starts around the Wannon Park horse-shoe circuit for nine wins and a second.

Her only non-winning run was when she finished second in last year’s Warrnambool Cup behind Nova Surf.

Owner Nathan Rooney led the cheering from a healthy support crew as his star chaser landed her first group win.

He said Arsonist broke in all right as a youngster but he was stunned just how far she had coming during a thrilling race career.

“What Heather and Steve have been able to do with her is really phenomenal.

They’ve also managed to get her back on track in the past few weeks after a wrist injury sustained in the Australian Cup series,” he said.

“She was set for this race and everything from the box draw to the race itself went to plan. She’s only just turned three-year-old and hopefully there’s a few more wins in store,” he said.

Arsonist previously finished runner-up in the group 1 Maturity Classic and was a finalist in both the group one National Sprint Championship and the group 1 Laurels.

She was well supported last night and started a surprising favourite ahead of boom sprinter Aston Galilee because of her abundant early pace and favourable draw.

After a moderate start Arsonist was able to explode to the lead from box two, while Aston Galilee from seven got into untold trouble in the run to the first turn.

But he checked off her heels on the first turn and with Proven Que Tee swooping from box eight there was some interference and then no chance of anything being able to run down the leader, which clocked 25.22 seconds.

Aston Galilee finished near the tail of the field.

Arsonist is a fawn bitch whelped April 2008 by Elite State from Flickering Lady (Fortified Speed x Goddess of Fire). She is raced by Nathan Rooney and trained by Heather Collins at Lara in Victoria. She has raced on 46 occasions for 22 wins and nine placings. The $30,000 first prize for the Cup took her over stake earnings to $145,430.

Listed below are the past winners of the Warrnambool Cup it is believed the Cup was conducted on the old Warrnambool track as far back as 1961 but records since 1972 show that many a top performer has won the feature event over the years.

Heading through the first corner Compacto seemed to get unbalanced, allowing the John Drennan-trained leader to slip away to a four-length break on the home turn.

Compacto was able to balance up down the home straight and flashed home, hitting the finish line locked together with Southwood Chief.

Compacto [7] flew home to pinch the lead from Southwood Chief [6] right on the finish line.

The Sale greyhound got the nod from the judge by just a head to take home the $50,000 winner’s cheque. Southwood Chief ($23.60) collected $17,000 for second with the Darren McDonald-trained Lacomare ($7.20) pocketing $8500 after flashing home for third a further two lengths away.

For Gilmore it was an emotional birthday present. He was shy about revealing just how old he is but he and trainer Judith Risk are both into their 70s.

Gilmore said the training duo had a finalist in the classic last year, but they drove to Warrnambool last night a lot more confident.

“This dog is quicker than the other bloke. He’s a pretty good dog,” he said.

“We bred and reared him. He’s out of our good brood bitch.

“We’ve come all the way down from Grafton especially for this race the past few weeks. It’s all been well worth it now.”

Gilmore was confident heading into the classic final after his charge draw almost perfectly in box seven. Compacto ($2.60) clocked the fastest time in the semi-finals last week and started a well supported favourite.

Drennan’s Southwood Chief, which is owned locally by the Kenna clan, was desperately unlucky.

He probably led for 449 metres of the 450m race and setting a blistering pace running 6.49 for the first split.