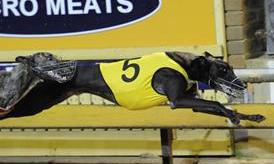 Fastest heat winner Shimaguni was sent to the boxes a $2.40 favourite ahead of Mystic Apple ($2.50) looking for his eighth consecutive win. However it was Strong Intention ($14.50) who began best, springing from box five to take the early lead.

Mystic Apple switched to the outside and set off in pursuit of the lamp lighter as Iceman Raikkonen cleared away from the pack in third.

The chasing pack could make no inroads down the back straight as the Group 2 feature became a race in two. Mystic Apple closed the gap to less than a length on turning for home but could do no more, Strong Intention holding on to win by three quarters of a length in 32.27 seconds.

Bling It On ($23.20) capitalised on a dream rails run on the final turn to run third a further four lengths adrift, just ahead of the luckless Shimaguni.

Trained by Lara trainer James Ennis and owned in Dingley by Todd O’Neill, the win was Strong Intention’s 12th victory in 41 career starts and his first over the middle distance. The $40,000 winner’s cheque took the son of Brett Lee’s career prizemoney to $80,230.

The McKenna series, being run over the new 595m distance for the second time, proved again an overwhelming success for the Club with five quality heats contributing to a final of the highest calibre. 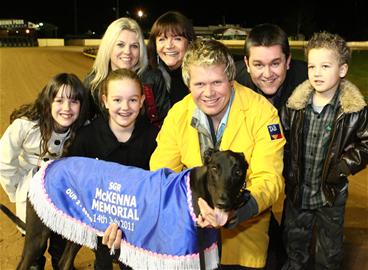 A Happy Team after the McKenna Final

Strong Intention is a Black dog whelped October ’08 he is by Brett Lee from So Busy (Bitability Bale x Gleaming Sarah). He is raced by Todd O’Neill and trained by Jamie Ennis and the Group 2 McKenna Memorial win took his record to 41 starts for 12 wins and 16 placings and prizemoney earnings of $80,230.

The McKenna Memorial was first run in 1971 and acknowledges the contribution to the Sandown Club by legendary administrator Jack McKenna. McKenna came to Sandown and took the job of Club secretary in the 1940’s from Tatura in central Victoria. He had held the position of secretary of the Tatura Plumpton Coursing Club and he made a major impact after arriving in the city. He was instrumental in the club’s advancement in many ways but importantly its move across the railway line and the purchase of the land of the current site. McKenna’s ability as an administrator is still to this day talked about in revenant terms and the sport and particularly Sandown will always be in his debt. The honour roll listed below of past winners is a classy one it starts with National Distance Champ Saki Dasher trained by Aussie Rules superstar Bob Pratt and finishes with this year’s winner Strong Intention plus last year’s winner Flash of Light both who won over the 595. When the race was conducted over the 700 the list contains some of the best stayers of all time.