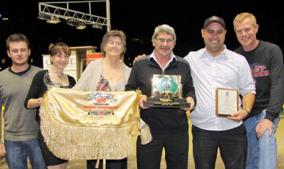 AGRA wishes to remind Owners and Trainers that nominations for heats of the Macro Meats State Sprint and Distance Championships close this coming Monday, July 25, 2011 at 12 noon.

The Australian Greyhound Racing Association wishes to remind Owners and Trainers that nominations for heats of the Macro Meats State Sprint and Distance Championships close this coming Monday, July 25, 2011 at 12 noon.

Heats for both the Sprint and Distance Championships will be conducted in six States with qualifiers for the Championship finals to be determined by:

1.    One greyhound which qualified for the race in each of the States of NSW, Victoria, South Australia, Queensland and Tasmania.

2.    Two greyhounds from the Club/Authority, as referred to in the event conditions, conducting the Grand Final (ie 2011 BGRC Albion Park).

3.    One Greyhound ranked the highest greyhound from the AGRA National rankings Group Race as at July 30, 2011 that competed in its respective State Final but did not win its State Final.

4.    Two greyhounds to be classified as reserves to be selected by the Club/Authority conducting the Grand Final from greyhounds which ran in qualifying races conducted by that Club/Authority as referred to in Clause 1. (ie 2011 BGRC Albion Park).

Greyhounds from across Australia will compete in the Macro Meats Championship finals at Albion Park on Thursday August 25, 2011 after qualifying in their respective State, for the chance to claim $75,000 and the Group 1 title.

Nominations along with AGRA acceptance forms should be submitted to relevant grading authorities by 12 noon Monday July 25, 2011. Acceptance forms outlining event eligibility and conditions can be found on the AGRA website – www.agra.com.au or from AGRA Clubs.

The first State heats will be conducted at The TOTE Racing Centre in Launceston, Tasmania on August 1, 2011.

Owners and Trainers can contact their relevant AGRA Clubs for further event information. Details on State Events are as follows: