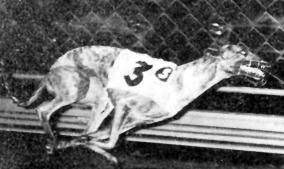 The mighty Shapley Escort winner of the first Ladies Bracelet

Bate was quite confident about Tonneli Bale’s prospects prior to the final, clearly labelling the daughter of Collision as the best chance of his five qualifiers.

Starting $2.50 at jump time, Tonneli Bale was rewarded for some outstanding form in recent months, collecting the $25,000 winner’s cheque for Bate and owner Paul Wheeler.

Whilst the Ladies Bracelet Final headlined the night’s racing, a lot of focus surrounded Did I Entertain and his bid to equal Stately Bird’s most Wentworth Park wins record of 25.

Lining up in the free for all, Robert Arnold’s charge assumed the lead through the first turn but couldn’t manage to shake off Dana Mary who finished stoutly, winning by a length in 29.91s.

The win was one of two on the night for Rod McDonald, who also saluted with Dana Bel, an all-the-way winner in 29.93s.

The night’s racing kicked off in fine style with Mr. Meana finishing strongly to win in 30.05s.

Prepared by in-form trainer Mark Gatt, Mr. Meana has been in ripe old form at recent outings, suggesting he’ll go through the grades in town with aplomb.

Here Comes Kenny was a standout victor on the night, making it back-to-back city wins with a 12 ¾ 29.87s romp in the Centrebet Stake.

Trained by Adele Powell, the son of Bit Chili and Remorse Lee improved on the clock on Saturday, having won in 30.02s the week prior.

In the fourth event, favourite punters were dealt a savage blow with outsider Rose Of Heather raising a gallant effort late to defeat Kingpin Star by a neck in 30.25s.

Heading off the top turn Kingpin Star looked all over a winner, but began to shorten stride heading for home. It was a terrific effort however by Rose Of Heather, who has been a model of consistency throughout her career.

Mark Azzopardi’s Proven Mayhem brought his strong provincial form to town in race nine, winning by a space in 29.85s.

The prodigious talent looked real good around the Wenty circuit, winning by 7 ¼ lengths over Fantasy Gift

Tonneli Bale is Black Bitch whelped January ’09 she is by Collision from Ambrosia Bale (Ashom Bale x Daishi Bale). She is raced by Paul Wheeler and trained by Graeme Bate at Lara in Victoria. The Group 2 Ladies Bracelet win took her record to 32 starts for 10 wins and 11 placings and prizemoney earnings of $71,375.

The Ladies Bracelet was first conducted by the GBOTA at Harold Park over 500 yards in 1971 when won by that mighty little brindle sprinter Shapley Escort. The event is open to the best 32 bitches nominated and the Final of the event is always conducted on the Saturday eve of Mother’s Day every year. The trophy is a beautiful ladies bracelet/watch and has been donated by the sponsor Evans & Sons Jewellery for the past few years. The feature was held at the GBOTA’s head quarters until 1987 when the track was closed for greyhound racing. It moved to Wentworth Park in 1988 and has been won by some famous bitches over the years. Gold Spring won the race in successive years 79/80 plus AGRA Hall of Famer Winifred Bale in 1983. Other brilliant greyhounds to win included Mandarin Girl, Camden’s Ghost, Jessica Casey, Short County and Victorians Amy’s Doll and Mutombo Miss. Listed below is the full honour roll.