Shintaro puts them to the sword in the Hume Cup Final 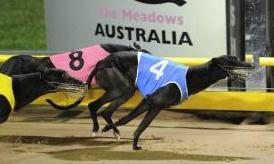 The underrated Shintaro Samurai ($14.70) upset some of his more fancied rivals to win the Group 2 City Of Hume Cup over 600 metres at The Meadows in front of a packed Cup eve crowd.

The son of Collide and Brandeen Lee was one of many chances as the field jammed down the back straight, and showed his strong finishing burst to defeat Karanji ($22.70) by three quarters of a length in 34.74, with Stack ‘Em Flat ($7.70) rounding out the placings, finishing a further neck away. Favourite McDoom ($2.30) finished fourth.

Trained by Rodney Clark, Shintaro Samurai had placed in 40 of his 63 starts prior to his Group 2 success, highlighting his consistency. The black chaser was purchased for only $1400 as a pup, and has now won over $100,000 in prizemoney.

The other feature of the night – the Radio Sport National Silver Bullet – was taken out by the brilliant Shereen Bale, leading from go to whoa to score in an outstanding 29.87 over 525 metres.

The daughter of Over Flo – who is also the sire of Group 1 Sky Racing TOPGUN winner Allen Harper – recorded brilliant sectionals of 5.03 and 17.75 to set up the seven and a half length romp. Race favourite Rewind ($2.30) ran second, with Strong Intention finishing third.

Shereen Bale’s victory caps off an amazing fortnight of racing at The Meadows for master trainer Graeme Bate and owner Paul Wheeler. The white and brindle chaser improved her record to 18 wins from 44 starts, and has now won over $160,000 in prizemoney.

Shintaro Samurai is Black dog whelped December ’08 he is raced by the Late Night Poker Syndicate and is trained by Rodney Clark at Toolleen. Shintaro Samurai is by Collide from Brandeen Lee (November Fury x Brandeen Rose). The Group 2 Hume Cup win took his record to 64 starts for 17 wins and 24 placings and prizemoney earnings of $101,835. 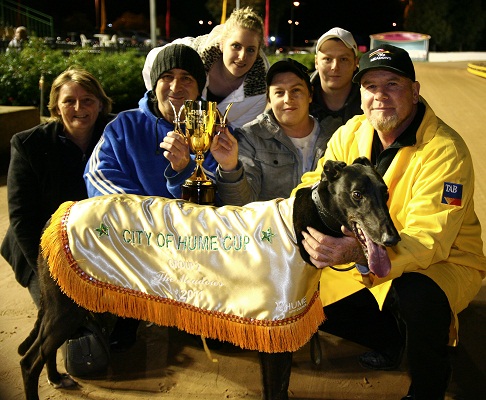 The Hume Cup was initially called the Lord’s Mayors Cup and was first run over 675 yards at North Melbourne in 1960, it moved with the club to Olympic Park and in 1964 became the Lord Mayors Trophy and remained a sprint race until 1988. It then became a distance event until 1994 when it was discontinued. The MGRA due to the tremendous support they are given by the Hume City Council resurrected the feature in 2000 calling the race the Hume Cup. In another change to the event last year it was conducted over 600 metres for the first time and that will remain the distance in the foreseeable future. Listed below are the past winners.