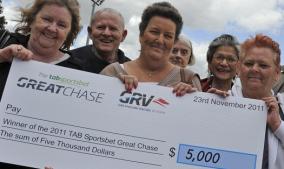 Members of Wintringham Community Services with their Cheque for $5000

Wintringham, which cares for homeless and ‘at risk’ older people, is one of 150 organisations that care for the intellectually and physically disabled that were involved in this year’s series.

Full Advanced won the group $500 by winning a heat at The Meadows three weeks ago, before qualifying for the final by running an impressive 2nd in his semi-final at Geelong.

“This is the most excited I’ve been in a long time,” Wintringham carer Catherine Floy said after the win.

“I got out of CPR training to be here today along with about 30 of our clients, and watching the race I just about needed CPR treatment myself as my heart was beating so fast,” she laughed.

“This is a wonderful event, and the best thing about it is that it makes groups like ours feel included. We are treated beautifully when we come to the races, and I can’t thank Greyhound Racing Victoria and TAB Sportsbet enough.”

On top of the $5,500 the group has already won throughout the series, Wintringham will also receive the equivalent of 10% of any prize money won by Fully Advanced for the next 12 months, which will almost certainly equate to thousands more.

“We’ll sit our residents down and work out how we are going to spend our money,” Catherine added.

Runner-up in the TAB Sportsbet Great Chase was Godsend ($4.40), which meant $2,000 for his randomly allocated group The Hub Support Services in Dandenong, while third place went to Witch’s Potion ($20.10), meaning a further $1,000 for her group, Stretton Park in Maffra.

Fully Advanced is raced and trained by Ron McCullagh at Lara he is a Black dog whelped February 2010 by Collision from Okay Supreme (Bombastic Shiraz x Texan Lady). Fully Advanced has won six of his 10 starts and with the $40,000 first prize for the Great Chase it took his current stake earnings to $62,935.

The GRV decided on a complete change to the Provincial Cup series in February 2003. Called the Great Chase, heats were held at every provincial and country track with qualifiers competing in semi-finals and a rich final at Bendigo. Designed to take greyhound racing to the ‘man in the street’ finalists were aligned with community groups who signed up to be part of the series and become involved with a dog that made the final. The Great Chase is a fantastic regional event providing the integration of involvement with local communities (ie. community groups supporting people with physical and intellectual disabilities), a partnership with Vic Health and top quality greyhound racing.

Brumby Lad won the inaugural $40,000 to winner event and in doing so provided excited members of the Pennyweight Park Centre Ballarat funds to the tune of $3250 plus a GRV-funded 10% of Brumby Lad’s earnings from June 1, 2003 to April 30, 2004. The final has been staged at different Country tracks since and raised thousands of needed dollars for many worthy groups that have participated over the seven years the event has been staged. Four years ago the event underwent some changes with the final being staged at a city venue for the first time. That format has continued in 2011 with the event again staged at the Meadows.

Listed below are the talented previous winners and the tracks they won the event on.