AGRA Run of the Month – July

AGRA Run of the Month – July 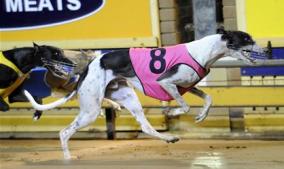 AGRA’s Run of the Month for July 2011 has been awarded to come from behind middle distance chaser Punk Warrior. He won the award for his barn storming performance to come from last and win his heat of the Group 2 McKenna Memorial on July 7th.

The son of Vapour Whirl came from a clear last just after the start, then weaved his way through the quality field, getting clear in the home straight to fly down the outside grab the lead before racing away to win by a length and a quarter in 34.53.

Punk Warrior has made a habit of being out the back in the early part of his races and is always doing his best work at the end. He has mainly raced over the middle distances with a few starts over the 700. However amazingly he won his first three starts two at Shepparton over the 390 and one at Bendigo over 430. In the Group two final of the McKenna he finished behind the placings in fifth spot.

Punk Warrior is a White & Black dog whelped May 2008 by Vapour Whirl from Punk Portrait (Primo Uno x Punk Star) he is raced by Christopher Perkins and trained by Mario Briganti. He has raced 27 times for 10 wins and six placings, and his overall stake earnings stand at $30,270.

As usual there were some outstanding runs recorded in July but Punk Warrior got the nod for his outstanding performance running down a field of quality greyhounds in a Group 2 heat of the McKenna Memorial.