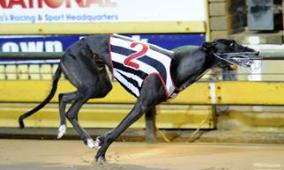 Bobby Boucheau is off to Albion Park after winning his heat of the Victorian National Distance Championship at Sandown Park.

The dual Group One winning stayer only has to compete in next week’s state final to take his position in Queensland’s National final. As the top ranked stayer at number four overall he holds the wild card and a spot in the final.

However if he wins the State final and he will more than likely start favourite the wild card will come down the line. Next on the list is prolific Group finalist Slick Lee, the ever consistant Brett Lee chaser is engaged in heat one at Wentworth Park tomorrow with a top four finish putting him in the State final.

Next on the list is the old champ and Queensland’s favourite chaser Dashing Corsair he has nominated for next Thursday night’s heats at Albion Park and would also be a better than average chance of making the State final.

Should those two win their National finals we will come back to the Victorian final were both the next highest ranked runners are engaged Bramley at 26 and Echelon at 27. The card may be determined by the finishing position.

Looking at the sprinters wild card, at number one is duel Group one winner Kilty Lad he has drawn box one in heat two at the Meadows tomorrow night. Next on the list is multi group winner Tonneli Bale at three she has drawn box eight in heat five at the Meadows. Next in contention is storm home specialist the exciting He Knows Uno, he takes his place in box five in heat two at Wenty tomorrow night.

Further down the line we have Group one Easter Egg winner Radley Bale he has drawn box one in heat four at the Meadows tomorrow night. Next at number 10 is Queensland sprint star Bogie King he has nominated for next Thursday nights heats at Albion Park, while the next sprinter on the list at 15 is Australian Cup winner Tasmanian St Pierre. He has drawn box seven in the Tassie State final at Launceston on Monday night.

Remembering the conditions for the Wild Card are the highest ranked Sprinter and Stayer on the AGRA Rankings for the end of July that competes in a State final without winning.