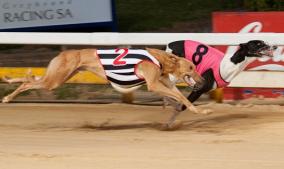 Mepunga Nicky stamped herself as one of Australia’s top greyhounds with an outstanding all-the-way victory in the Adelaide Cup at Angle Park last night.

Less than a month after claiming the Group 3 SA Oaks, the Victorian bitch continued her terrific form, beating a quality field to take out the $75,000 first prize. Mepunga Nicky, who started $4.10 on Tattsbet, flew the lids and cleared the field from box eight, railing hard and holding off a late challenge from $2.90 favourite Radley Bale to claim her first Group 1.

Radley Bale could not match Mepunga Nicky’s blistering pace initially but kept inching closer during the run before going down by a neck on the line. Master trainer Graeme Bate will have to wait another year to break his Adelaide Cup duck. Cape Hawke ($4.70) fought on well for third, ahead of Allen Hertz, while the only South Australian representative – Crazy Heart – trailed the field in.

Trained at Anakie by Jeff Britton, the daughter of Premier Fantasy is undefeated in four starts at the Adelaide circuit and lowered her previous best by a length-and-a-half, clocking 29.45 for the 515m trip.

The victory elevates Mepunga Nicky to the upper-echelon of Australian greyhounds, with 13 wins from 20 career starts and earning more than $150,000 in prizemoney.

“I can’t believe it,” Britton said after the race.

“I didn’t know if she was far enough in front and when I saw Radley Bale behind her I thought she was gone.

“She just keeps doing the right thing. She did everything right when she was over here for the SA Oaks recently, and based on that run I couldn’t bypass the Adelaide Cup”.

Britton, from the Geelong suburb of Anakie, praised the quality of the Adelaide Cup field, in which seven of the eight finalists were trained in Victoria.

“They’re the best dogs in Australia and she’s beaten them.”

“I thought there would have to have a bit of trouble among the other runners for her to win, but she beat them fair and square which is fantastic”, Britton said.

Mepunga Nicky is a White & Black bitch whelped July 2009 by Premier Fantasy from Mepunga Diamond (Brett Lee x Mepunga Anna). She is raced and was bred by Barry Smith, she is trained at Anakie by Jeff Britton. She has now won 13 races and been placed on four occasions from her 20 starts. Adding the first prize money of $75,000 for the Adelaide Cup her over stake earnings went to $147,755.