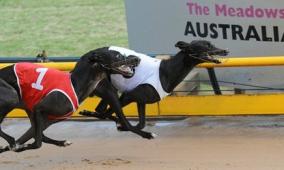 Marbro Man winning at the Meadows

Marbro Man is the toast of New South Wales after winning the world’s richest straight race, the Group 2 Healesville Cup (350m). It’s rare for an interstate-trained greyhound to snare a Victorian group race in this period of Big V dominance, in particular a country cup.

However, the reward for the Simon Brown trained speedster was a cool $40,000 and he took his career record to 20 wins from just 34 starts.

Favourite Flash Drive was the early leader passing the first section in 6.56 but he was quickly hauled in as the field charged up the straight racing his way to the front Marbro Man stormed home over the last 40 metres to score from the fast finishing I’m A Fencer trained by Marbro Man’s pervious Victorian mentor Kel Greenough. Time for the final was 19.27 another quick run and faster than his heat win in 19.50.

Marbro Man spent 12 months racing in Victoria under the guidance of leading trainer Kel Greenough. From July 2010 to July of this year he won three races at the Meadows and made the final of the Silver Chief finishing fifth behind Kilty Lad. He also won races at Warragul and Ballarat before returning to Simon Brown in the Hunter Valley. Since arriving back with his owner-trainer-breeder he has won in the best of the night at Maitland on August 4 and he set a new track record at Bulli for the 400 metres running 22.32 on September 26.

Marbro Man is raced, trained and was bred by Simon Brown from Abermain in the Hunter Valley of New South Wales. He is a Black dog whelped June 2008 by Elite State from Simerema (Token Prince x Superbee). Marbro Man has won 20 of his 34 starts and has been placed on nine occasions, with the $40,000 first prize for the Healesville Cup it took Marbro Man’s current stake earnings to $92,220.

The Healesville Cup was first run in 1990 on Victoria’s only grass and straight track up the challenging 340 metres incline in the foothills of the Dandenong Rangers. The first Cup was won by Victorian Greyhound of the Year Eureka Man. He won the title that year in controversial circumstances defeating Hall of Fame Superstar Highly Blessed. The award in those days was a points system and although she had won the four major events in Australia somehow she hadn’t race enough at the two Victorian City tracks. However Eureka Man was a wonderful performer an iron dog, he was raced and trained by Ken Patterson a long-time resident and stalwart of the Healesville Club it’s fair to say the club would not be racing today without the voluntary hard work and dedication of Ken Patterson and his wife Pauline. Sadly Ken passed away last month after a short illness. The Cup was granted Group 3 status last year in 2010 when the winner Gardam Prince won $20,000 first prize for trainer Darren MacDonald. After a major renovation this year following the inclusion of Healesville as a TAB and SKY fixture the track in now a sand surface of 350 metres that can also conduct races over 300 metres. The new surface will allow the club to race all year round something it was unable to do due to weather conditions in the winter months on the grass track. With the support of the GRV all Victorian Country Cups became Group 2 events this year paying $40,000 to the winner.

Past winners of the Healesville Cup