It added to the fabulous run of luck they have had with members of the Primo Uno-Hannalore litter they bred back in January 2008.

Pretty Malaika, a $5 chance for the final, scored by a length and a quarter over Big Bunga with two lengths to Stylish Daymo ($5.00) in third. Big Bunga, chasing his second successive Galaxy victory, started the $3 favourite.

Pretty Malaika landed her 34th victory in a remarkable career of 75 starts and ran 23.52 to win the final. Her Tweed record now stands at 13 starts for nine victories.

The bitch is a member of a litter that contains last year’s Group 2 Lismore Gold Cup winner Chachi as well as El Toreador winner of the Future Stars Maiden at Lismore and a Young Guns at Albion Park.

Edith and Frank are both 67 and have been at Sporing Grove on the Northern Rivers for the past six years following their passion for greyhound racing. They originally hailed from Townsville.

Frank, ever modest, said at the race presentation “don’t good dogs make ordinary trainers look good”. But that is far from the case and Pretty Malaika’s fabulous career is indicative of that.

Pretty Malaika and Big Bunga, drawn beside each other at the start, began brilliantly and shared the lead approaching the first turn. But the bitch forced her way over to the rail going out of the back straight and dashed clear. The favourite came again in the straight but Pretty Malaika was too strong.

It was a race in two from the moment they began so well and got to a clear lead soon after the start.
The magnificent black bitch landed today’s Tweed Galaxy, the 40th running of the great race. 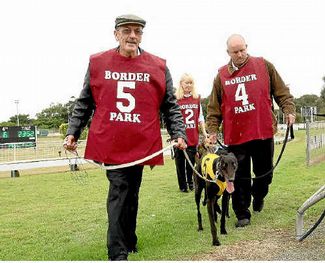 Frank Hancock and Pretty Malaika after the Galaxy Final

Pretty Malaika is a Black Bitch whelped January 2008 by Primo Uno from Hannalore (Cry Havoc x Pistol Smoke) she is raced & trained by Frank Hancock of Spring Grove New South Wales. Pretty Malaika has raced 75 times for 34 wins and 25 placings and with the $20,000 first prize for the Galaxy her overall stake earnings went to $66,590.

It wrapped up yet another successful Galaxy weekend with big crowds attending the “Tweed” on both Saturday and Monday.

The Border Park Galaxy was the brain child of legendary club administrator Harry Pledger, Pledger severed a record number of years as club secretary now in his 80’s he is still Club president. The name of the race was conceived by Harry and meant a galaxy of stars racing under the stars. It has been a most sought after feature since it’s inception in 1971 and has been won by a number of quick dogs over the horse shoe circuit of 420 metres. Not only do they need to have high speed but also the ability to back up on the Monday after winning their heat on the Saturday. The race is just as famous for its winners as it is for the cavalcade of top liners that have got beaten trying to win it. It remains the richest non TAB feature race in Australia a mantel it has held since King Doolittle won in 1971. Listed below is the full honour roll.