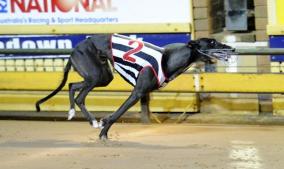 In one of the most hotly contested finals in Sandown Park’s history, Bobby Boucheau pinged from box 2 to assume the early lead and was never threatened, racing to a five length win over former track record holder Pillow Torque ($5.50).
Sent to the boxes a $4 favourite on course and a $3.70 favourite on the TAB, ‘Bobby’ added the 715m record to his 595m track record, stopping the clock in a stunning 41.57 seconds to slash more than a length off the previous.

“Once he landed in front I knew he would be hard to run down because he is so strong,” said a delighted Jackson

“I knew he was capable of running that sort of time, he just needed to jump well. I’m absolutely delighted”

The win was the second Group 1 win of Bobby Boucheau’s blossoming career having captured the Superstayers at the Meadows in March. But victory in tonight’s feature held special significance for the young Pearcedale trainer.

“It’s just a thrill to be involved in such a fantastic race and to win the richest staying race in the country is unbelievable. Bobby loves Sandown Park and because it’s like our home track, it’s a special thrill to win.”

Jackson’s father, Kel Greenough, completed a successful night for the family when his star greyhound So Seductive ($4.40) finished in third place.

It was a remarkable training performance from Jackson given Bobby Boucheau is the first greyhound and only greyhound she has trained. The win was Bobby Boucheau’s 15th from 25 career starts, and the $100,000 winner’s purse took his career prizemoney beyond $200,000.

Bobby Boucheau joins an impressive honour roll which includes Mantra Lad, Lizrene and four-time winner Bold Trease. He will now aim for the Group 1 Gold Cup at Albion Park, Queensland, to be run on Thursday 16 June.

In the night’s support feature, Don Chendo ($5.10) took out the $72,500 Group 3 Dawson for Yuroke trainer Len Ketelaar, leading all the way to defeat Arsonist in 29.64 seconds.
And in one of the most remarkable training efforts in modern greyhound racing, 2009 Solo Melbourne Cup winner Lord Ducal returned from a 510 day ‘retirement’ to win the Free For All in a best of night 29.60 seconds.

Feature racing continues at Sandown Park next Thursday night with the heats of the Group 1 Macro Meats Sapphire Crown. The $72,500 final will be run on Thursday 9 June 2011. 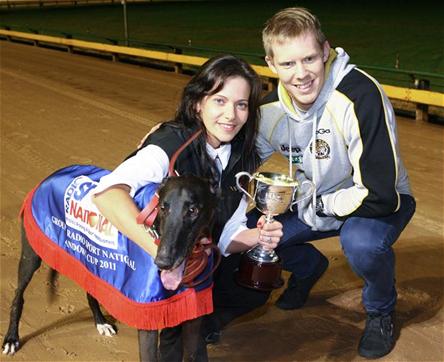 Bobby Boucheau is Black dog whelped May ’08 he is by Bombastic Shiraz from Dallas Gypsy (EJ’s Douglas x Advert). The Group 1 Sandown Cup his second after he won Group 1 Macro Meats Super Stayers in March took his record to 24 starts for 14 wins and five placings and prizemoney earnings of $204,640. He is raced and trained by Angela Jackson at Pearcedale in Victoria.

Listed below is the honour roll for the Sandown Cup the race has been won by many of the champion stayers of the past including AGRA Hall Of Famers Lizrene and Bold Trease. Plus the great stayers of their particular era Fawn Scout, Paul’s Thunder, Corcoran, Raurimu, Boronia Blossom, Tonight’s Wish, Osti’s Joker, Bentley Babe, Arvo’s Junior, Best Quoted and Sargent Major.

Thanks for information supplied by Michael Floyd Sandown Administration.