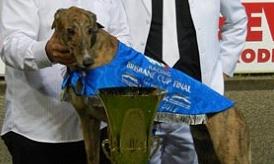 Glen Gallon after winning the Cup

Glen Gallon (Flying Stanley-Incoherent) scored by a length and three-quarters over early leader Dyna Tron ($3.00) with a half head to Radley Bale ($9.40) in third.

“We had an offer of $55,000 for him from Victoria and then another offer from China,” said Steve. “Tony and I discussed it. He admitted he didn’t want to lose the dog and asked if he could run him through the Brisbane Cup.”

Glen Gallon landed his 10th victory in 20 starts and he has also run six placings. It is the first Group 1 for the Velocity Lodge partners, Steve Williams and Lionel White.

Brett admitted at the after-race presentation he believed Iso Octane was his best chance of winning the Cup before the series started. Iso Octane had won the Group 1 Winter Cup early in the year for Brett and his Sydney connections.

“It doesn’t get any better than this,” said Steve Williams. “Well, it doesn’t for me. I went weak at the knees when he won.”

Steve and Lionel both were decked out in their white suits for the night. The Velocity Lodge boys have made a habit of dressing in suits the colour of the Group finalists’ box draw.

“It’s a tradition we started when Super Size ran in the Ipswich Gold Cup final years ago,” said Steve. “She had the six and we were decked out in green suits that night.”

Glen Gallon is the first Group 1 winner for Velocity Lodge. They had already been represented by Ruff It in a Golden Easter Egg and Glen Gallon in the National Sprint.

Melbourne Cup winner Dyna Tron began brilliantly and led through a first section of 5.69 but Glen Gallon was well away and settled close to him in the back straight.

Brett thought his chances were lost when Glen Gallon and Spring Gun checked each other at the 600m boxes. “I thought he was gone, but he’s a great chaser and a great dog and he kept coming,” said Tony.

That he did and he railed through to grab the lead in the straight.

Glen Gallon is a Red Brindle dog whelped August 2009 by Flying Stanley from Incoherent (Bombastic Shiraz x Queen Of Tigers) he is raced by the Velocity Lodge Partners and trained by Tony Brett at Grandchester in Queensland. He has raced 20 times for ten wins and six placings, adding the Brisbane Cup’s first prize of $75,000 to his overall stake earnings they went to $113,171.

The Brisbane Cup has had a few name changes when it was first run in 1972 and won by Victorian Garron Court the race was known as the Gabba Sprint Championship. It remain that name until 1976. It was then called the Brisbane Cup from 1977 until 1981 changed in1982 to be known as the Coca-Cola Cup until 1999 when it changed back to the Brisbane Cup. The race was conducted at the Gabba until the track closed in 1992 and since has been staged at Albion Park. Listed below is the Honour Roll containing some of the champion greyhounds among the past winners.