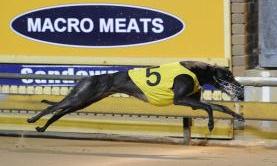 Bekim Bale stamped himself as the most exciting greyhound of his generation with his scintillating win the Group 3 Macro Meats Shootout at Sandown Park Thursday night.

Suited perfectly to the four-dog format, Bekim Bale began on even terms with Cape Hawke before settling a length off the lead through the first turn. Down the back straight the pair had opened a two length gap on the Graeme Bate trained duo Radley Bale and Allen Harper before Bekim Bale made his move, powering past Cape Hawke and racing to a 5.75 length victory in a race record 29.13 seconds

Radley Bale claimed second place ahead of the tiring Cape Hawke – the third time in as many starts Radley Bale has finished second at Group level – with Allen Harper unable to recover from a poor start to finish a further half a length away fourth.

“He got a good clear run early and once he positioned up to the outside of Cape Hawk he was in with a really good chance,” said kennel representative George Dailly.

“Half way down the back he was right there with them. His last sectional time is just phenomenal and there probably isn’t a greyhound in the country that can go with him – other than his brother Heston Bale. He’s just a very good greyhound.”

The youngest and least experienced greyhound in the race, Bekim Bale improved his record to six wins from eight starts (with two second placings). The $40,000 winner-takes-all prize took his career earnings to $59,640, and he will now target the $200,000 to the winner Group 1 Solo Melbourne Cup series.

And in an ominous warning to his rivals, owner Paul Wheeler believes we are yet to see the best of his new star.

“It was unbelievable,” said Wheeler.

“With most greyhounds – and especially with our breed – you don’t see the best of them until they turn two and half or three. He’s just turned two years old, so given another six months I would say there is a very, very big prospect that he could improve on that again.”

The Macro Meats Shootout victory was the first for both Dailly and Wheeler, and capped a memorable night for the pair as they combined to win three of the night’s Solo Melbourne Cup Preludes. Wheeler claimed a fourth Prelude win when Allen Elroy saluted for Graeme Bate. 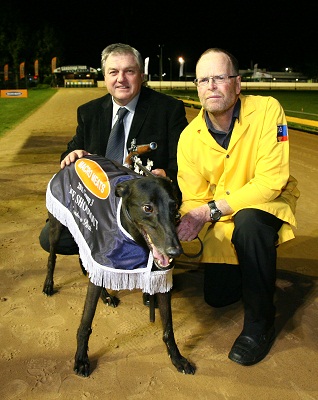 Bekim Bale is a Black Dog whelped October 2009 by Bartrim Bale from Amelia Bale (Sonic Flight x Evonne Bale) he is raced by Paul Wheeler and trained by the Dailly team at Anakie in Victoria. He has raced eight times for six wins and two seconds his overall stake earnings stand at $59,640.

The first Shoot-Out was contested in 1998 and it’s fair to say the concept wasn’t entirely embraced. Hall Of Fame superstar of the time Rapid Journey’s connections didn’t chose to participate openly declaring they didn’t support the concept. In fact the Sandown Club only received three nominations, Time Framer from Victoria who started long odds on favourite and finished last Golden Butter from New South Wales and Western Australian Reggemite a brilliant sprinter of his time he lead all the way to win easily by three and half lengths. Leviathan owner-breeder Paul Wheeler is another big name who never supported the pay to entry conditions of the Shoot-Out only becoming a participant in 2009 the second year of free entry. Since that first year the race has become well accepted and over the period between 1999 and 2007 the club received between seven and 10 nominations all hoping for a start in the winner take all feature. However in 2008 the club decided on a dramatic change to the race they would drop the $5000 entry fee and open the Shoot-Out up to all comers. They were rewarded with a host of nominations and a wonderful field to choose from. The race also dropped back to a Group 3 event but lost no apparent impact at all and received similar if not more media coverage than it had previous years. In another controversy following massive negative publicity last year the club committee for the first time choose the field. They opted to include 715 metre record holder So Seductive. Most observers in the industry felt it was a mistake given the National Sprint winner Smooth Fancy was left out of the final field. So Seductive performed below par and the GRV insisted that the grading department have final say on the selected field which was the case this year. In another twist this year the Geelong Club decided without consultation with Sandown to schedule their cup heats and final at the same time as the Shoot-Out. In response the Sandown committee increased the first prize from $25,000 to $40,000 the same first prize as the Geelong Cup. Who knows what might happen with the Shoot-Out next year another change would not surprise anyone. One thing is for sure the race has never lacked in promotion and publicity good or bad.