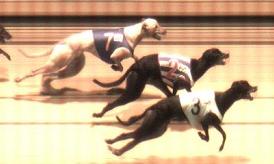 Duffy Just gets up to win Lismore Cup

Qualifying for the final after his second to fastest qualifier Bogie Beltah in the heats, Duffy staged a gruelling battle with Aretha Trick from the outset, getting the better of the public elect in the last hop, running 30.50s.

It was a perfect time for the son of Surf Lorian to register his second Lismore win, victorious at the track just once prior to Tuesday’s career defining win.

The rising four year old has been a model of consistency for McArdle throughout his 45-start career, winning on eleven occasions whilst placed at a further 17 appearances.

Going around at odds upwards of 25/1, Duffy had a neck to spare over runner-up Aretha Trick ($3.20) on the wire, with rank outsider, Dean Turley’s Wizz Bang ($58.80), the run of the race, making up countless lengths to finish half a length away in third.

Of the beaten brigade, fastest qualifier Bogie Beltah failed to make her presence felt from the outside draw, whilst Orange sprinter Spring Ferrari got caught up in traffic after beginning on terms.

The Lismore GBOTA put on a wonderful night’s racing with a number of feature finals run and won.

The $3,000 to-the-winner John Stollery Novice Final (520m) was won by Macie Bell, for trainer Darryl Armfield, spread-eagling her rivals to win by 10 lengths in 30.19s.

It was a clean-sweep for Anthony Azzopardi in the $3,000 Ron Winkler Smash Repairs Final (635m), snaring the trifecta with 1/10 favourite Zipping Malfoy defeating kennelmates Delezah and Spring Keroma.

The winner ran 37.70s, continuing his emergence as one of NSW’s most promising distance prospects.

The other feature of the night – the Harvey’s Towing Stayers Trophy – was won by Tango Tapper for Queensland trainer Bob Giltinan in 42.88s.

The Lismore Club has enjoyed 32 years of been sponsored by the Lismore Workers Club, something quite rare these days furthermore the association is set to continue in 2011.

The Cup has been won by some fantastic sprinters over the years, since it was first run in 1968 when won by Bonnie Beaver, the prizemoney was the princely sum of $50. It was worth $500 when John Scholten took over the reins in 1978 that year the cup was won by Deb’s Jewel and rose to $8000 when Rapid Journey won it in 1998.

The Association has gradually increased the prizemoney and this year first prize to the winner is $40,000 and holds Group 2 status the race was first awarded Group status (Group 3) in 2001.

The event is open to the best 32 greyhounds nominated and below is a list of Cup winners since 1968.