AGRA Greyhound of the Month – July

AGRA Greyhound of the Month – July 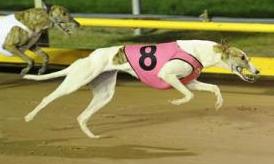 Greyhound of the Month Shereen Bale

In the final of the Group 1 Maturity the highly-fancied Shereen Bale used her wide draw perfectly, displaying sizzling speed to round up early leaders Rewind and Mepunga Nicky in the run into the back straight, she raced away in the home straight winning the Group 1 easily, it was her first Group success.

Due to a paperwork mix up Shereen Bale will not take her place in Saturday night’s heats of the National Sprint Championship at the Meadows. It is a shame given how well she has raced in the Maturity series. Graeme Bate will consider a run in the Group 3 Townsville Cup and then on to the Group 3 SA Oaks at the end of August.

Shereen Bale is a White & Brindle bitch whelped January 2009 by Over Flo from Horizon Bale (Stately Bird x Vodeena Bale). She is raced by Paul Wheeler and trained at Lara by Graeme Bate. She has now won 14 races and been placed on 16 occasions from her 36 starts. Her over all prizemoney stands at $135,490.

AGRA congratulates the owner Paul Wheeler, trainer Graeme Bate and Shereen Bale on being awarded the AGRA Greyhound of the Month for July 2011.