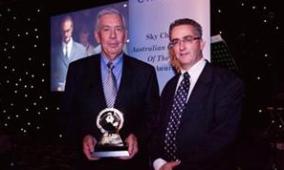 At the most recent AGRA Annual meeting held on the Gold Coast the member clubs voted unanimously to appoint former leading South Australian administrator Howard Ashton as its Executive Officer for the next three years.

The position since inception has been the responsibility of member clubs on a rotational basis every three years.

With the position falling to the responsibility of GRSA in a change of direction CEO Matt Corby approached Ashton to fill the role. The highly regarded AGRA Hall of Fame member was delighted to be back to contribute at a national level accepting the position with his usual enthusiasm. Ashton’s administration support with be provided by GRSA.

Ashton brings a host of Greyhound knowledge and experience to the role gained over 50 years in office. His most notable achievements among many include Honourary Secretary AGRC 1952 – 1971, Secretary-Manager AGRC full time from 1971-1996, Racing Operations Manager AGRC 1996-2000, he was also instrumental in bringing AGRA Group Racing to the table in the late 80’s.

Howard Ashton was introduced to greyhounds by his father, a stalwart of the sport, at the age of 15 in 1952 when pilot dog racings was conducted at the Waterloo Corner track in South Australia.

Ashton is very much a South Australian born in Norwood spending some time growing up in the country then back to the suburbs where he has remained to the present day.

Ashton replaces outgoing Executive Officer Brenton Scott, CEO of the NSW GBOTA. Scott has completed an outstanding three year tenor in the position overseeing a number of administration enhancements in all areas, but in particular an upgrade to the constitution and a total revamp of the Group Race Calendar, the meeting expressed its gratitude for his time in the role and Brenton’s continued dedication to the improvement of the Association.

Scott will remain Group Race Co-Ordinator, a position he has held since 1995 and continue his work on the AGRA committee with particular support to the AGRA Hall of Fame.

The new AGRA President is BGRC Chairman Michael Byrne and the new Vice President is Denise Fysh the Chairman of the HGRC. Neil Brown will continue into his third three year term as AGRA Publicity Officer.